The Catalan newspaper, “Mundo Deportivo”, stated that Real Madrid fans chose Xavi Alonso as the most appropriate alternative to succeed Ancelotti, whose continuation in the leadership of Meringue became greatly threatened after the heavy defeat he received in the Clasico with four goals for free. 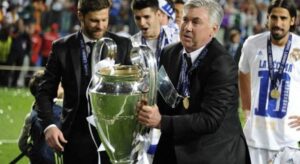 The newspaper added that Real Madrid fans support the candidacy of Alonso, who was a player in the team, to train the royal after Ancelotti’s departure, adding that the first expires his contract with Real Sociedad next summer and can lead Real Madrid.

And the Spanish newspaper, “Marca”, had reported earlier that Raul Gonzalez, coach of the youth team at Real Madrid “Castella”, had come to lead the first team training from next season, succeeding the current Italian coach Carlo Ancelotti.

It is noteworthy that Real Madrid leads the Spanish league standings with 66 points, 9 points ahead of its closest competitor, Seville, the runner-up with 57 points.

Barcelona announces the face of Mexican Pumas in the Joan…