Barcelona and Dembele agree to renew the contract until 2024

Barcelona and Dembele agree to renew the contract until 2024

Barcelona has approached the official announcement of the renewal of the contract of its French star, Osman Dembele, which expired at the end of last season, after the two parties reached a final agreement during the last hours.

According to the Spanish newspaper “Sport”, in the past hours, Dembele’s agents and the Barcelona Sports Administration took the appropriate steps to find a final agreement for the player to stay with the club until 2024. 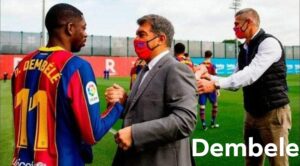 The newspaper added that communication was conducted between the two parties to settle the remaining details, everything indicates that the renewal will become official in the middle of next week.

The newspaper indicated that the player will sign a new contract for two years, with the same conditions as the club without new additions, after the player’s desire to continue his career with the team.

Paris Saint-Germain and Chelsea tried to sign the French winger, but the decision to renew his contract with Barcelona was the player’s choice from the start.

Dembele joined Barcelona in the summer of 2017, from Borussia Dortmund, in order to compensate for the departure of Brazilian star Neymar at the time to Paris Saint-Germain.

Pjanic prepares to cut his salary in Barcelona