Benzema: Without Ancelotti and Perez I would not have won the Player of the Year award

Benzema: Without Ancelotti and Perez I would not have won the Player of the Year award 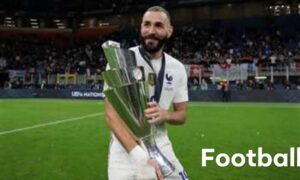 Benzema received the award for the best player in Europe for the first time in his career on the sidelines of the draw for the Champions League group stage for the 2022-2023 season.

After receiving the award, Benzema said: “I would like to thank my teammates, my coach and the president. Without the president of Real Madrid and Ancelotti, I would not have won this award.”

“We at Real Madrid do not know how to give up, we fight for everything until the last moment,” he added.

Benzema won the award with 523 points, followed by De Bruyne with 122 points and Courtois with 118 points.

The French striker scored 44 goals in 46 matches with Real Madrid in all competitions last season.

The 34-year-old won the European Champions League and European Super Cup, in addition to the League and Cup titles with Al-Maringi last season.

Real Madrid turns the tables on Almeria with an exciting victory