The English club Everton announced the signing of striker Neil Mawbay, on a 3-year contract to continue with the Toffees until 2025, coming from Brighton, during the current summer transfer market. 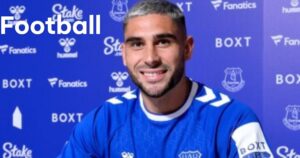 The new Toffees striker has spent the past three seasons at Brighton, scoring 26 goals in 84 Premier League matches.

“Everton is a fantastic club with incredible fans and I’m very happy to be here,” Maupay told the club’s official website. It was an easy choice for me when I started speaking with the club. I knew right away that I wanted to play for Everton and help the club succeed.”

“I will do everything I can for Everton. That’s what the fans want, they want players who are ready to give their best and are ready to fight.”

Everton scored one point after 3 rounds of the English Premier League this season, after losing against Chelsea and Aston Villa and drawing with Nottingham Forest.

Read more / Barcelona’s illusion continues.. Lewandowski towards revenge for his new team for his previous act!

Atletico Madrid tied with Espanyol 1-1 in the Spanish League