Arsenal have settled a deal for Manchester City striker Gabriel Jesus, to support the Gunners attack in the new season 2022-2023.

Ben Jacobs, the famous sports journalist for the British “CBS” network, said that the Arsenal administration had made a preliminary agreement with Manchester City, to include Gabriel Jesus, the Sky striker, during this summer. 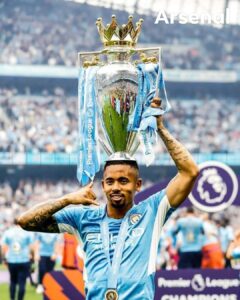 The journalist added that the value of the transfer of Jesus from Man City to Arsenal, will cost the treasuries of the Gunners 55 million pounds, after the City officials refused 35 million pounds from the London club.

He continued, that Gabriel Jesus will receive a weekly salary of 220,000 pounds, with Arsenal.

He continued, that the transfer of the Brazilian striker Jesus, the City striker, to Arsenal, will take place in a period of 7 to 10 days at the most.

It is worth noting that the Brazilian Gabriel Jesus refused to move to the English club Tottenham, preferring to wear the Arsenal shirt.

De Bruyne, the best playmaker in the world, celebrates his…