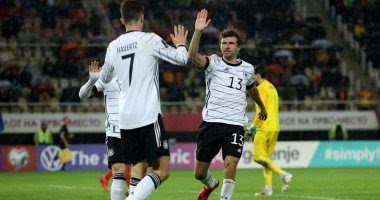 The German national football team defeated North Macedonia, by four goals to zero, in the confrontation that took place between them this evening, Monday.
The Todor Boriski Stadium, as part of the eighth round of European qualifiers for the 2022 World Cup in Qatar.
Chelsea’s Kai Havertz scored the first goal for Germany in the 50th minute of the match.
Then Timo Werner, the Blues striker, added the second and third goals for the German machines in the 70th and 73rd minutes of the match.
And this is before the young player Jamal Musiala concluded the Manshaft quartet in the 83rd minute of the match.

The German national team played the match with a formation that included:

Goalkeeper: Neuer
Defence: Keirer, Sole, Rom, Kimmich
Midfield: Klostermann, Goretzka, Havertz
Forwards: Gnabry, Muller, Werner.
With this result, the German national team leads the table of the tenth group, in the European qualifiers for the 2022 World Cup.
He has 21 points, collected from 7 victories and one loss, while North Macedonia is in third place with 12 points, with 3 wins, 3 draws and 2 losses.
The German team succeeded in revenge against North Macedonia, after losing 1-2 in the third round of the World Cup qualifiers.
With this victory, Germany became the first to qualify for the 2022 World Cup, other than Qatar, the host country for the tournament.
And that was before the last two rounds of qualifying, after Romania, runner-up with 13 points, beat Armenia 1-0, in the same group.
For more news about English and international
football, click here