Italy defeats Belgium with a double and takes third place 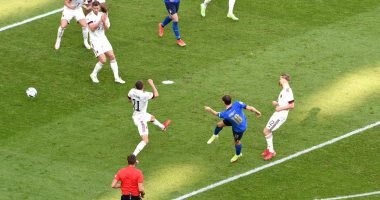 Italy won a deserved victory over Belgium 2-1, in the match that brought them together this evening, Sunday, in the match for third and fourth place in the European Nations League, at the “San Siro” stadium.
The Italian team excelled offensively over Belgium, as it tightened its control over the course of the match, amid a relative appearance of the Red Devils.
Thibaut Courtois saved Belgium’s goal from a certain goal, after a wonderful save from Berardi, the Italian star, in the 18th minute.
The Azzurri continued his pressure on Belgium, where Chiesa passed a typical ball to the star Rasbadori, who shot it but hit the foot of the latter’s defender in the 21st minute.
The Belgian team began to exchange the Italians for the attacking side, as they missed the opportunity to advance against the Azzurri with a shot that hit Donnarumma’s post in the 25th minute.
The Italian team intensified its attack on Belgium, with the beginning of the events of the second half, until Nicola Parilla managed to score the goal for the Azzurri in the 47th minute.
In the 60th minute, Batshuayi almost scored the equalizer for Belgium, but the crossbar saved Italy again.
In the 65th minute, Federico Chiesa got a deserved penalty kick after a clear obstruction inside the penalty area, then Berardi scored the second goal for the Italians against the Red Devils.
In the 86th minute, Charles de Kitiliari scored the first goal for Belgium against Italy, but it came late, and the match ended with the Azzurri winning 2-1.
With this result, Italy finished third in the European Nations League, followed by Belgium in fourth place.
The match between Spain and France, to determine the champion of the European competition, will be held at nine to a quarter of the evening today, Sunday.
For more news about English and international
football, click here

Italy defeats Belgium with a double and takes third place

Mo Salah is the most expensive in the English Premier League…