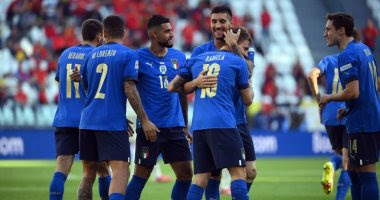 The Italian national team continued its impressive scoring record in various tournaments during the current year 2021, after beating Belgium 2-1.

In the match that brought them together this evening, Sunday, in the match for the third and fourth place in the European Nations League, at the “San Siro” stadium.

And the statistics published by the global network “Opta” revealed that the Italian national team raised its score after the Belgium double to 39 goals.

in all competitions in 2021, his best goal-scoring record in a single year since 1928 when he scored 42 goals.

The Italian national team also scored 101 goals under the leadership of Roberto Mancini in various tournaments since taking over the job.

In a related context, Roberto Mancini, coach of the Italian national team, set a record after leading the Azzurri to a 2-1 victory over Belgium.

The Opta network, which specializes in statistics and records, stated:

Mancini has become the fastest coach to reach 30 victories in the history of the Italian national team in all competitions, having managed to achieve this in 44 matche.

The Italian national team intensified its attack on Belgium, with the beginning of the events of the second half, until Nicola Parilla managed to score the goal for the Azzurri in the 47th minute.

In the 65th minute, Federico Chiesa got a deserved penalty kick after a clear obstruction inside the penalty area, then Berardi scored the second goal for the Italians against the Red Devils.

In the 86th minute, Charles de Kitiliari scored the first goal for Belgium against Italy, but it came late, and the match ended with the Azzurri winning 2-1.

With this result, Italy finished third in the European Nations League, followed by Belgium in fourth place.