The draw for the group stage of the European Champions League for the current season 2022-2023, which was drawn Thursday evening in the Turkish city of Istanbul, made a number of stars in direct confrontations with its previous clubs, most notably the return of the Polish star Robert Lewandowski, the Barcelona striker, to face his former team, Bayern Munich.

Robert Lewandowski returns to face his former team Bayern Munich, who recently left for Barcelona during the summer transfer market in a deal worth 50 million euros, where Leva spent 7 years in the Bavarian team shirt. 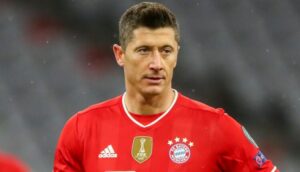 The Norwegian star Erling Haaland, the current Manchester City top scorer, faces his former team, Borussia Dortmund, who left him during the current summer transfer market in a deal worth 60 million euros.

Argentine star Angel Di Maria, Juventus player, returns to face his former club, Paris Saint-Germain, after he left this summer after the end of his contract with the Paris club.

Finally, AC Milan defender Fikayo Tomori will face his former club Chelsea, after he left him last summer in a final transfer deal worth 28 million euros.

The results of the Champions League group draw were as follows:

Group A: Ajax of the Netherlands, Liverpool of England, Napoli of Italy, Rangers of Scotland.

The European League draw .. The history of the confrontations between Barcelona and Manchester United