Manchester City announced on Friday evening that 18-year-old defender Luke Mbeti has signed a new contract with the Citizens to continue with the team until the summer of 2027.

And Manchester City club explained that Mbiti, the latest member of a group of academy graduates, agreed to a three-year extension, as he signed a new contract that would keep him at the Etihad Stadium until the summer of 2027.

He added that Mbeti rose through the academy teams with great distinction and was given his first appearance with the first team of Man City last season in the big victory over Wycombe Wanderers 6-1 at the Etihad Stadium in the third round of the Carabao Cup and continued to add two more matches to his tally. 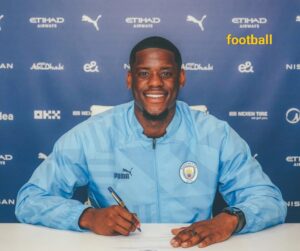 For his part, Mbeti expressed his happiness at signing his new contract with City, saying, “This is a very proud moment for me and my family. I want to express my thanks to everyone at the club for showing their confidence in me.”

“I’ve been fortunate to work under some great coaches across the academy and to also be able to train under Pep Guardiola and his staff which is an incredible privilege,” he added.

On the other hand, Man City is going to a preparatory tour in the United States of America, during which it will play two friendlies before the new season next July, the first against Club America, and then Bayern Munich.

In the first official match of the next season, the English Premier League champion Manchester City will meet professional Liverpool within its ranks, the Egyptian star Mohamed Salah, who won the FA Cup for the Charity Shield title, on July 31 at the King Power Stadium.

The English Premier League top scorer.. Haaland is at the top and Harry Kane is runners-up

The owners of the strongest attack in the major European leagues