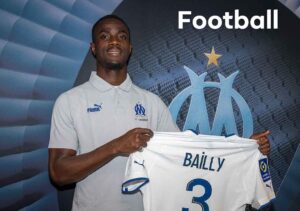 French club Marseille announced today, Wednesday, the signing of Ivorian defender Eric Bailly, from Manchester United, on loan for one season only, during the current summer transfer market.

Bailly joined the ranks of French Marseille on loan with the option to buy at the end of the season, as he became the eleventh deal concluded by the French southern team during the current summer Mercato.

The Ivorian international became the fourth defender to join the French club this summer, after Chancel Mbemba, Samuel Gigot and Isaac Touré.

The joining of Bailly came after he spent 6 seasons with United, after having a bad season last season, the central defender played only 7 games in all competitions.

The Ivorian defender arrived this morning in France, in order to complete the procedures for his transfer to the Marseille team, and successfully passed the medical examinations before the official announcement of the deal.