English press reports revealed that the Italian club AC Milan is keen to conclude an agreement with Liverpool striker, Divock Origi, as soon as possible.

Liverpool manager Jurgen Klopp does not rely primarily on Origi, and reports claim that Origi is ready to leave Anfield when his contract expires in the summer.

And over the past few days, AC Milan were said to have taken a step towards signing the Belgium international, as they are trying to boost the last third ahead of next season. 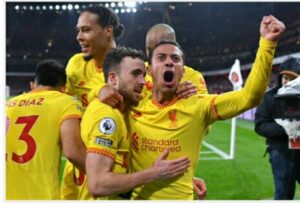 With Origi open to the Serie A experience, Sky Sports said that Rossoneri officials want to sign the player by the end of the week.

The report claims that there is a desire to bring in a younger replacement for the duo Olivier Giroud and Zlatan Ibrahimovic, who are currently 35 and 40 years old respectively.

Origi’s role was limited to only five starters and nine substitute matches in all competitions this season, and his last five goals were against AC Milan in the Champions League in December.

German reports: The Bayern Munich administration is considering a replacement for Nagelsmann

Group standings in the UEFA Nations League after the end of…

Argentina seeks to equalize Brazil and Spain in a historical…

The owners of the strongest attack in the major European…