For 5 years .. Inter Milan is very close to renewing the contract of the best player in the Italian League, Italian press reports revealed that AC Milan is close to linking the young Portuguese, Rafael Leao, to a new contract this summer, to secure the future of one of its most important players last season, which ended with the team crowning the Calcio title.

The 23-year-old Portuguese striker’s current contract with the Rossoneri expires in 2024, so the club needs to secure its future with a new contract this year if it is to avoid a difficult situation next summer. 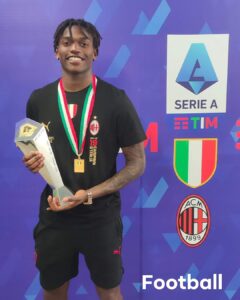 According to La Gazzetta dello Sport, Milan and Leo are almost in agreement regarding the renewal of the contract and talks are underway between the two parties and on the way to a final agreement.

The talks will undoubtedly be long and there is a lot to consider, such as the compensation of approximately 20 million euros owed to Sporting Lisbon.

The Rossoneri hope to tie him up until 2027, when he is offered a five-year contract with a penalty clause, reflecting his importance to the club.

The Portuguese striker was one of the stars in the Milan squad who won the Scudetto title, and was named the best player in the competition, after scoring 11 goals and providing 10 assists in 34 Serie A matches.

Read more : The Spanish Cadiz is the latest interested in the inclusion of Mustafa Mohamed

Arteta achieves a remarkable number in the English Premier League