13 million pounds .. Mohamed Salah is the most expensive in the English Premier League fantasy 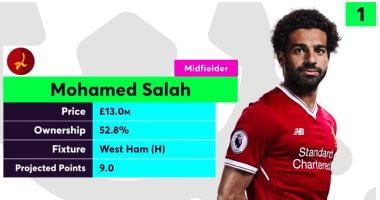 The brilliance of the Egyptian international Mohamed Salah, the Liverpool player, was directly reflected in his price in the fantasy game of the English Premier League, which is of great interest to fans of the round witch.

The English Premier League Fantasy game sets hypothetical prices for each player, and changes up or down according to his level in official matches.

Behind him is the Algerian Riyad Mahrez, the Manchester City star, in second place among the most expensive Arab stars in the game, and its current price is 8.7 million pounds, knowing that he scored 14 points.

While the Moroccan international Hakim Ziyech, the Chelsea star, occupies the third place among the Arab stars, with a value of 7.3 million pounds, after scoring 4 points.

While the Egyptian Mahmoud Hassan “Trezeguet”, the star of Aston Villa, occupies fifth place, at a price of up to 5.4 million pounds, knowing that he has not played since the beginning of the current season due to injury.

Mo Salah is the most expensive in the English Premier League…