French press reports revealed, today, Wednesday, that the French club Paris Saint-Germain has a golden opportunity to sign the Egyptian star Mohamed Salah, the Liverpool star and the captain of the Egyptian national team, next summer. 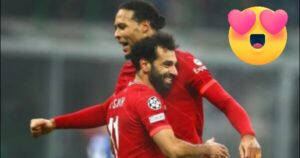 And the French newspaper “le10sport” confirmed that Leonardo, the sporting director of Paris Saint-Germain, has a golden opportunity to sign Mohamed Salah, whose contract with Liverpool expires in the summer of 2023.

And the newspaper pointed out that Salah did not extend his contract with Liverpool, and therefore Paris will have an opportunity to sign the 29-year-old player at a lower price than expected to compensate for the departure of French Kylian Mbappe.

And the French newspaper added that Paris Saint-Germain is not the only club watching Mohamed Salah, but there is also a desire on the part of Juventus to sign Salah to be a replacement for Paulo Dybala, the Juve star, whose contract expires next summer, and he refused to continue with the team.

Salah moved to Liverpool after he was sold from Roma in the summer of 2017, where the price of the deal was 42 million pounds.

In the same context, the Italian newspaper, Corriere della Sera, reported that contracting with Egyptian star Mohamed Salah is a dream for the Juventus administration, which wants to strengthen the team’s ranks with a big star, especially after the departure of Portuguese star Cristiano Ronaldo, in addition to the imminent departure of Argentine Paulo. Dybala.

And the newspaper added that Massimiliano Allegri, coach of Juve, requested the necessity of contracting with the Reds star, in order to strengthen the offensive aspects of the team next season.

And the Italian channel Tele Lombardia had indicated earlier that Juventus inquired about the price of Mohamed Salah in the past days, in order to take advantage of the failure to reach an agreement between the Egyptian player and the English team to renew his contract.

An Italian channel said that Juventus is seeking to re-enter the glories of Italian football in the European Champions League after being eliminated from the round of sixteen this season, and this may be by supporting the teams with strong deals, including the Egyptian Mohamed Salah deal.

And press reports said that Juventus has the determination and determination to include Salah since the Egyptian player was playing in the Fiorentina and Roma teams in Calcio, but Liverpool succeeded in kidnapping the player.

Barcelona announces the face of Mexican Pumas in the Joan…