The French Monaco defeated its Turkish counterpart Trabzonspor 3-1 in the match that was held between them on Thursday evening at the “Louis II” stadium in the third round of Group H of the European League for the current season 2022-2023.

The goals of the match came through Wissam Ben Yedder (two goals) and Axel Desassi in the 14th, 45th and 55th minutes, respectively, for Monaco, while Trabzon’s Anastasios Pacasitas goal came in the 72nd minute of the match.

The match witnessed the presence of the star Mahmoud Hassan Trezeguet in the starting lineup of the match and it lasted until the 73rd minute before he was replaced in a miserable offensive attempt. 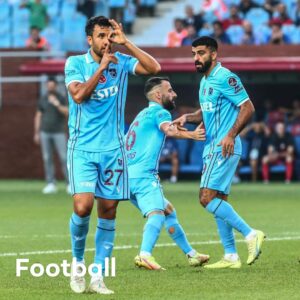 While Trabzon is at the bottom of Group H in the European League with 3 points collected from one win and two losses, scoring 5 goals and receiving 7.

While the match witnessed the announcement of the direct expulsion of the player Maxi Gomez, Trabzon striker, in the 11th minute.

The Egyptian international Mahmoud Hassan Trezeguet, the pavilion of the Turkish Trabzon team in the European League, appeared during the last two group stage matches in a very distinctive way, which put him in the ranks of the players participating in the current version of the “Europe League”.

The global network, “Sofa Score”, placed a trio in the ideal formation for the second round of the group stage of the Euroleague competition, where he obtained the second highest rating for this week, with a score of 8.6.

Mahmoud Trezeguet played two matches in the European League now, during which he scored a goal and made the same, and Trezeguet joined the ranks of Trabzon during the summer Mercato from the English Aston Villa team and crowned him with the Turkish Super title.

The formation of Trabzon was as follows:

The European League draw .. The history of the confrontations between Barcelona and Manchester United