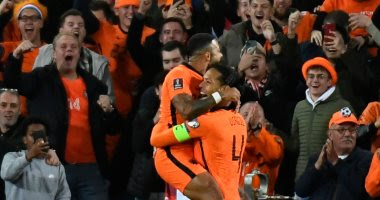 The Netherlands national team defeated Gibraltar 6/0 in the match that brought them together this evening, Monday, at the Feyenoord Stadium.

As part of the eighth round of European qualifiers for the 2022 FIFA World Cup Qatar.

With this result, the Netherlands team continued to lead the group standings with 19 points collected from winning 6 matches.

One draw and one loss, 29 goals scored, and only 6 received.

And the Dutch national team had previously won a landslide victory over its host Gibraltar by seven clean.

In the meeting, which brought together the two teams at the “Victoria” stadium in the matches of the third round of Group G.

The Netherlands has a match against Montenegro away from home and Norway at the Stade de Koep in Rotterdam.

On the other hand, Gibraltar is bottom of Group G without any points.

After losing the eight matches he has played so far, he scored only 3 goals and conceded 34 goals.

The Netherlands national team won a valuable victory over its host Latvia, with a goal free of charge.

In the match between the two teams at the Daugava Stadium, as part of the seventh round of Group G matches.

The formation of the Netherlands was as follows:

Tunisia beat Zambia by three in an exciting game