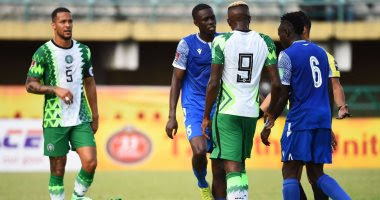 Nigeria took revenge on its Central African counterpart, defeating it with two goals to no return, in the match that brought the two teams together.

At the “Barthelemy Boganda” stadium in Lagos, in the fourth round of the third group of African qualifiers for the 2022 World Cup.

Nigeria was defeated at home by the Central African team in the third round of qualifiers last Thursday.

With this result, Nigeria boosts the group lead with 9 points, while Cape Verde comes second with 4 points from 3 matches.

With a goal difference from the third Central African team from 4 matches, while Liberia is in fourth place with 3 points.

In the same group, at six in the evening, the teams of Cape Verde and Liberia will meet at the first stadium.

In the Group E matches, Mali won a precious away victory over Kenya with a 1-0 win.

In a match that was absent from Al-Ahly player Aliou Diang, who remained on the bench throughout the match.

In the same group, Uganda defeated Rwanda 1-0, to lead Mali with 10 points, two points ahead of runner-up Uganda.

The Tanzanian national team ignited the tenth group conflict, by defeating its host, Benin, with a goal free of charge, to take the two teams temporarily in the lead with 7 points.

Two points ahead of the Republic of the Congo, who will meet Madagascar at six in the evening.

The second round of African qualifiers for the World Cup (group stage) consists of 10 groups.

In each group, 4 teams will face each other back and forth, and the first place holder will advance to the third and final round.

The third round is a knockout round like the first round, where each of the ten teams faces their opponent back and forth, and the winner qualifies for the 2022 World Cup.