Goal Morning.. Ronaldo is your hand the fortress of Milan with a great goal in the Milan derby 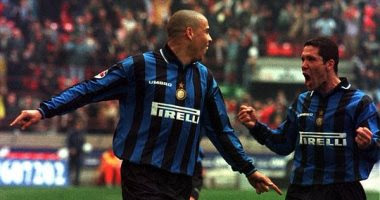 You may forget a match and not be able to remember its events, or you may forget players by their eyes and not remember their names when one of your friends reminds you of them.

But it is very difficult to forget the wonderful goals scored by the stars of the round witch, whose names are immortalized in the football records, and have remained to this day stuck in everyone’s minds.

Goal Morning is a report in which I will present to you every morning one of the most beautiful football goals scored by the game’s top stars.

The phenomenon Ronaldo demolished the fortifications of AC Milan when he wore the Inter shirt against Milan, with a wonderful goal from one touch directly at the Rosinori net.

In the match that brought the two teams together in March 1998 and ended with the victory of Black and Blue, 3-0.

Ronaldo was known as the Phenomeno or Phenomenon during his playing for the Milan Snakes, and he made very great levels.

But by the summer of 2002 the fans were greatly disappointed by his departure.

Ronaldo left Inter and went to Real Madrid for 25 million euros, while Inter signed Hernan Crespo from Lazio as his replacement.

Moenchengladbach tempts Ben Sabaini with a new contract to immunize

Argentina, with striking force, meets Paraguay in the World…

The brilliance of Mohamed Salah and Mane motivates the team…

Moenchengladbach tempts Ben Sabaini with a new contract to…