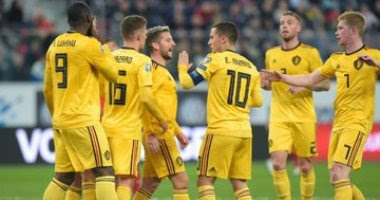 Italy will face Belgium on Sunday evening in the match for third and fourth place in the European Nations League, at the “San Siro” stadium.

The match between Italy and Belgium, at 3 pm, will be broadcast on beIN Sports 1 HD Premium today, Sunday.

Italy had lost 1-2 to Spain in the semi-finals of the European Nations League, while Belgium had fallen to France with a thrilling 2-3 in the same round.

Despite being a match for third and fourth place in the UEFA Nations League, it will be strong and exciting due to the quality of the players and the elements of experience, which each team brings individually.

Italy coach Roberto Mancini, and the holder of the Euro 2020 title, aims to reconcile the Azzurri fans, by defeating Belgium and taking at least third place, after being eliminated at home against the Spanish club in the semi-finals.

On the other hand, the Belgium team, led by Roberto Martinez, hopes for an exit worthy of the Red Devils, by defeating the Italians and taking third place.

The Red Devils are looking forward to defeating Italy, to avenge their 1-2 loss in the last Euro 2020 quarter-final.

And miss the Italy team against Belgium, Leonardo Bonucci, after he was sent off in the match against Spain, after an elbow intervention on Sergio Busquets, captain of La Roja.

While the Belgium list attests to the presence of a number of stars, led by Kevin De Bruyne, Romelu Lukaku and Yannick Carrasco.

Tunisia beat Zambia by three in an exciting game

Klopp: We celebrated the goals of Mohamed Salah and Mane

Summary and goals of the Liverpool match against Brentford