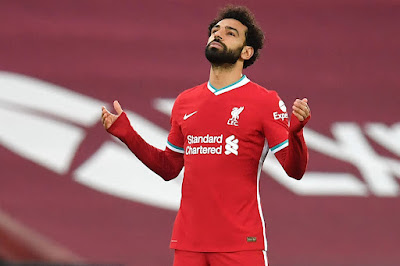 The newspaper quoted in its report:

“Mohamed Salah has a secret clause in his contract with Liverpool, which states that if he does not win the Ballon d’Or at Anfield, he can demand a move to La Liga Barcelona or Real Madrid.”

“Mohamed Salah’s current contract with Liverpool expires in the summer of 2023, and concerns are growing about the future of the “Pharaoh”, as the issue of moving to the Spanish League is a possibility.”
Mohamed Salah became an inspiration in Liverpool, as the Egyptian helped his team win the English Premier League and the Champions League since his move from Rome in 2017.
And the newspaper indicated, quoting that the contract of the Portuguese star Cristiano Ronaldo, who returned to Manchester United again this summer.
He is guaranteed a £1m bonus if Manchester United win the Champions League, the Ballon d’Or or Europe’s best player.
Another player in the English Premier League has a clause related to winning the Ballon d’Or in his contract, which is Thiago Alcantara, a Liverpool player, who moved to Anfield from Bayern Munich in the summer of 2020.
In addition to the Portuguese Bruno Fernandes, who signed for Manchester United from Sporting Lisbon in January of 2020.
It was also reported in the previous period that Manchester United striker Anthony Martial has a special clause in his contract.
It allows his former club, Monaco, to get 7.2 million pounds if he wins the Ballon d’Or.
For more news about English and international
football, click here