Trezeguet bid farewell to the Champions League with Trabzon

Trezeguet bid farewell to the Champions League with Trabzonspor 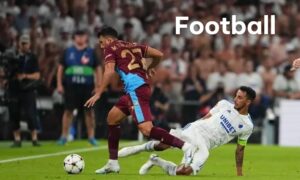 Trezeguet took part as a substitute with Trabzon in the 66th minute of the meeting, after entering in place of his colleague Abdelkader Omar. The Trabzon team had lost the first leg match that brought the two teams together last week in Denmark, with a score of 1-2.

The Turkish team will go to play in the European League.

In another match, the Scottish Rangers qualified at the expense of the Dutch Eindhoven, by winning the second leg with a score of 1 – 0, and the first leg ended in a 2-2 draw.

It is worth noting that the draw for the Champions League group stage will take place tomorrow evening, Thursday, in Istanbul, Turkey.

Trezeguet won the first titles in his professional career with Trabzon, after his team defeated Sivasspor in the Turkish Super, by four goals, before the start of the current season’s matches in the Turkish League.

Cristiano Ronaldo may participate in the Champions League, despite his transfer to the Saudi club Al-Nasr, in this case only!!